What Is Engine Complete Overhaul

Engine Overhaul is often mentioned when the car has reached certain age or mileage.
There are actually two types of Engine Overhaul, Engine Complete Overhaul and Engine Top Overhaul.

We will cover on Engine Complete Overhaul first.

Automotive Repair Workshop will normally diagnose and perform certain testing to confirm whether an Engine Overhaul is required.

Some owners will choose this option for their 10 years old car, when they decided to renew their COE, for their car to be restored in a good working condition for another 5 or 10 years of good driving.

First and Foremost, Engine is brought down from the car, disassembled for mechanic to inspect and evaluate.

Like a jigsaw puzzle, Engine components and parts are taken out, and the cleaning process takes place.

This is the most overlooked Process of the Engine Overhaul, due to Carbon Build-up over the years of driving, whether the car owner will enjoy better fuel efficiency and improved engine power depends mainly on this process.

Most Workshops neglected this De-carbonisation Process, as it’s very tedious and Time-Consuming.

The end product of the engine should look Cleaned with sheen of Shiny Metallic and derived of black carbon.

Following up with the replacement of Pistons, Pistons Rings, Timing Chain etc, Engine components is to be assembled parts by parts by into the Engine Block.

An overall inspection will be conducted to ensure that all hoses and piping relating to Coolant and Air intake is well fitted, with no signs of leaking.

A Series of Test with special Equipments will be conducted, such as Compression test, Coolant Leakage Test and Computer Diagnostic Test to ensure the car is in good working condition.

After Engine Overhaul, there’s a rundown Period, for the Engine to get used to the new pistons

Once all inspection & checks is completed, the car can then be handover to the car owner.

Why Do You Need Engine Complete Overhaul

There are a few signs to look out for when your vehicle require Engine Overhaul,; we will list the commonly encountered signs and the reasons behind it below: 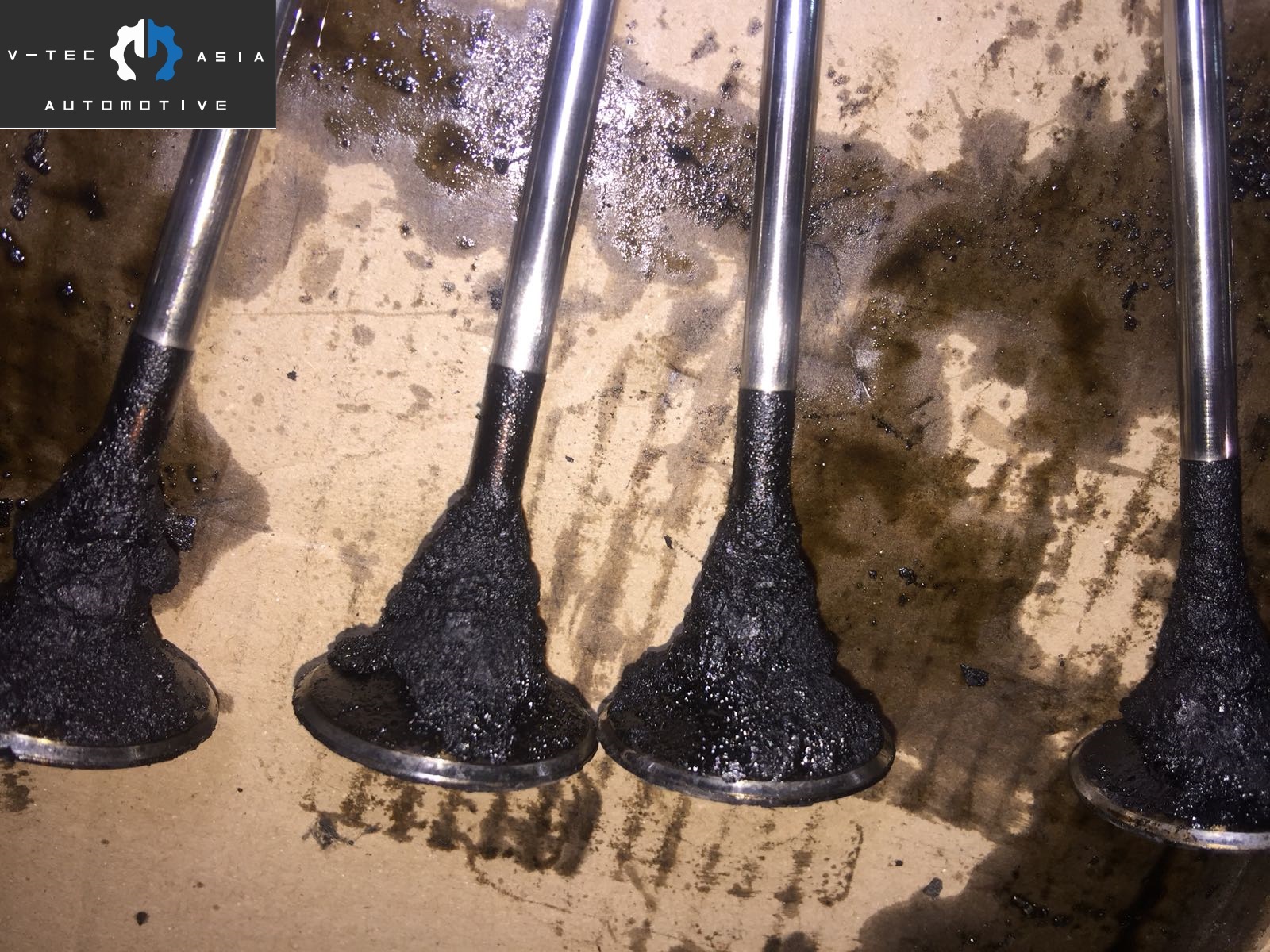 Do you constantly need to Top-up your Engine oil when checking the dipstick, or does your in-car computer prompt you that your vehicle Engine Oil is low?

Low Quality Engine oil is one of the reason, this can be solved by using a Premier Grade. But most common of all reason related is Worn Piston Rings. When you have worn out or damaged piston rings, Engine oil will be able to seep through and enter the combustion chamber causing the Engine Oil to “Disappear”. 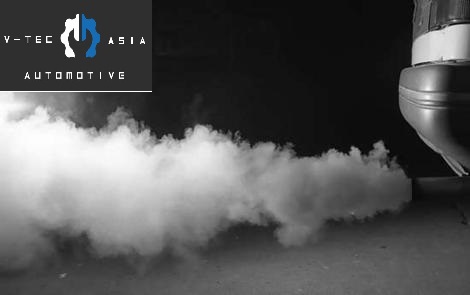 2. White smoke in the exhaust

Excessive smoke emits from your exhaust pipe with a strong gasoline odour, it may also smell like burnt plastic, and not to confuse this symptom, white smoke is producing out of the exhaust throughout the day, not only during initial start-up or on a cold weather.

Engine oil that escapes through the worn rings is burned with the fuel mixture in the cylinder. Your car exhaust will puff out white smoke as the oil burns inside the Cylinder. 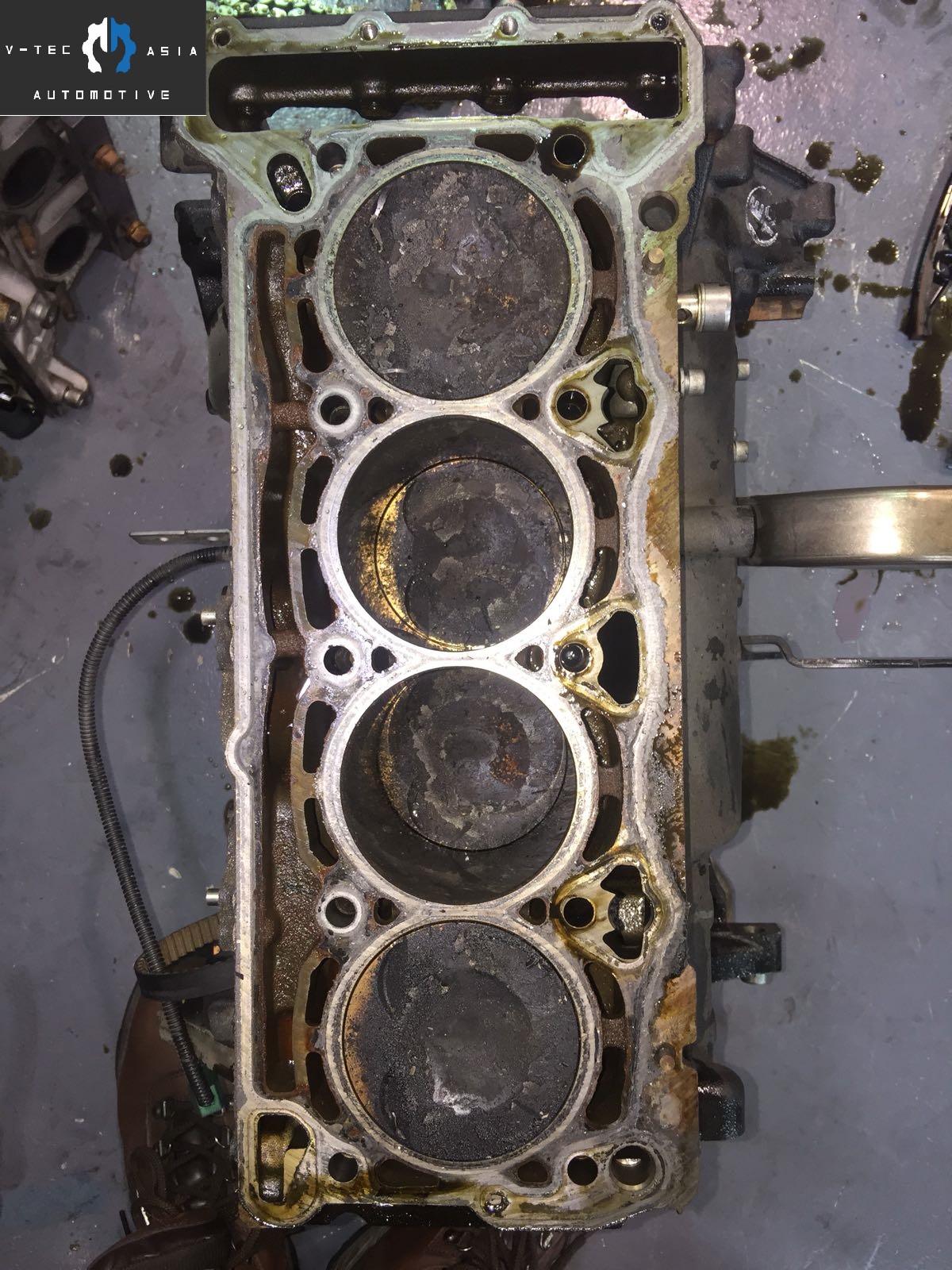 When car is stationary or at low rev, you will feel the Engine jerks and vibrates, when driving you will encounter a drastic loss of Engine Performance with signs of Misfiring, this may sometimes generate a Engine Check Light.

Compression Test should be perform to test out if any low/reduced compression is happening in any of the Cylinders.

A few reasons might be a Cracked / Worn Pistons and/or Piston Rings losing their Tension to seal against the cylinder bores.

These factors may contribute to a Lean Fuel Condition, which means the Cylinder loses its balance of air/fuel mixture before It can ignite, therefore not able to combust properly. 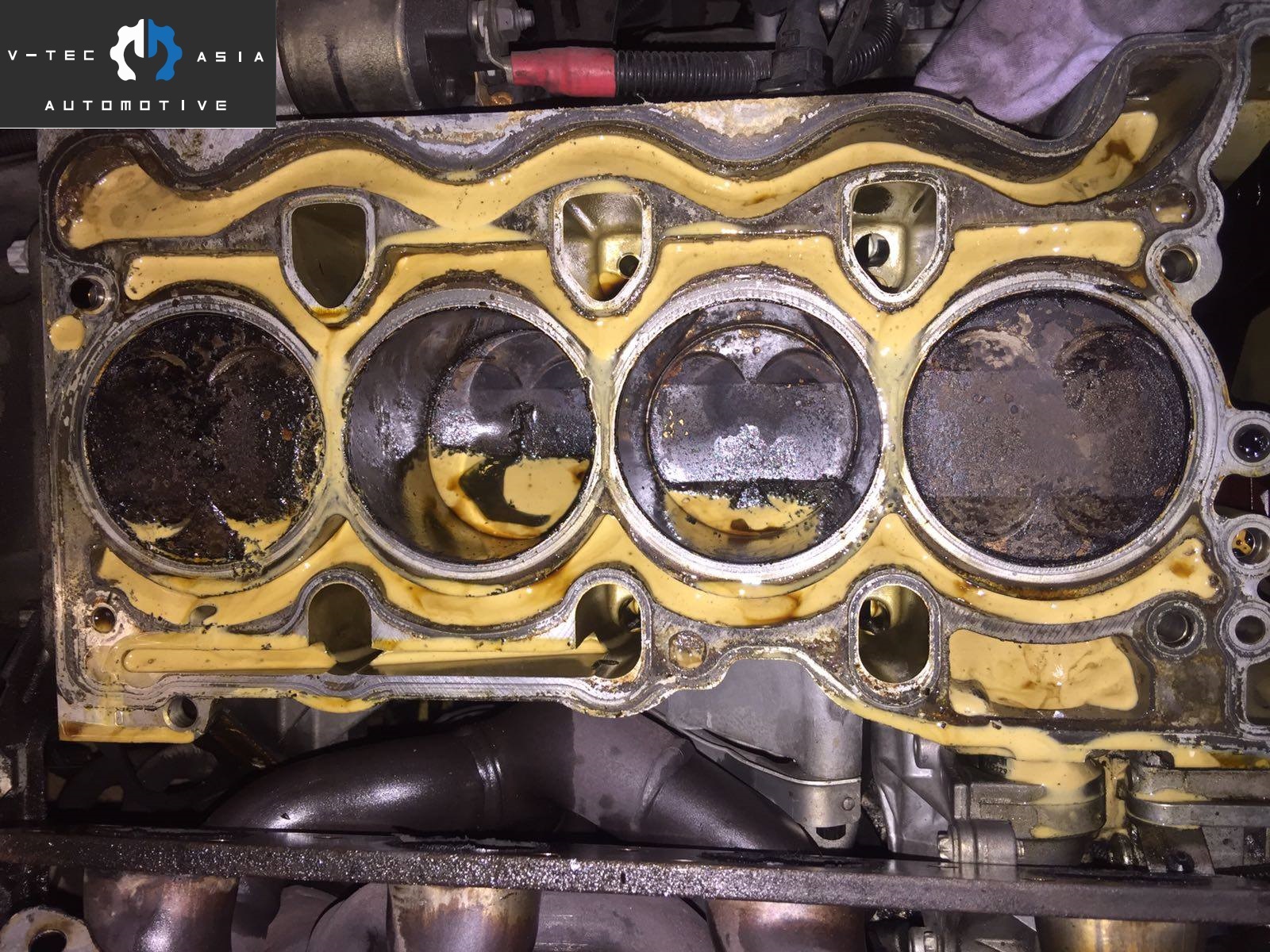 Engine Oil & Coolant mixture is discovered upon inspecting the Radiator Tank or using a Dipstick to measure the Engine Oil level, you’ll notice the Coolant / Engine Oil has formed into a Milky Yellowish Cream-like substance.

This substance will overflow to various parts of the Engine resulting in Engine Breakdown.

The Cylinder Head Gasket is sealed between the Engine Block and Cylinder head, it’s important role is to separate the high pressure combustion chambers from the Engine Coolant.

Most commonly due to Engine overheating, they tend to burn and destroy the Cylinder Head Gasket, which cause it to lose it functionality, allowing Engine Oil and Coolant to seep into each other’s compartment causing a mixture of Milky substance. 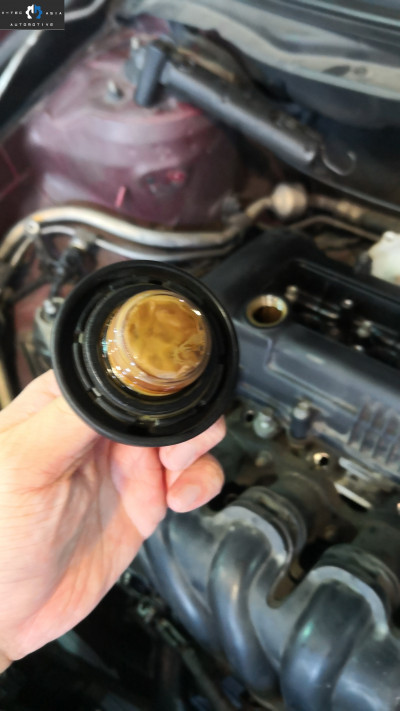 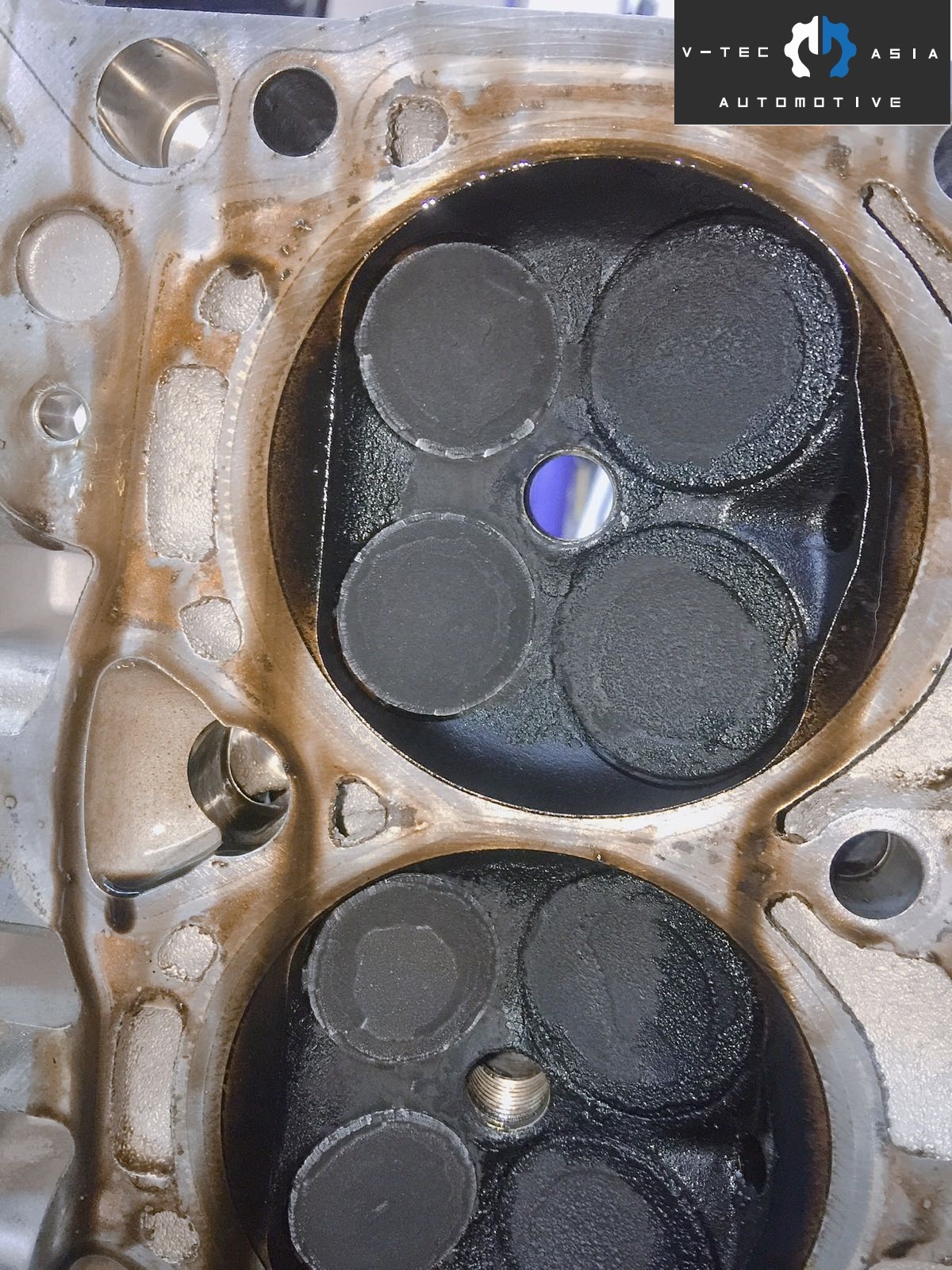 As a result of Carbon deposit built up on the Pistons and Intake valves of the engine, it will lead to a measurable effect on the overall car performance and fuel efficiency.

It may look like the Engine is choking with carbon, suffocating and struggling to breathe properly while being choked by the black Carbons, the more you depress onto the Throttle Pedal for more acceleration, it coughed out a significant amount of black smog out of the exhaust pipe.

With a choking Engine, its power and performance reduced and fuel economy will fall significantly.

When fuel burns, it released as a normal combustion byproducts, known as Carbon, which normally deposit on the intake manifold and Pistons.

As Carbon build-up in the Intake valve will clog and restrict airflow resulting in reduced performance.

One of the reasons for the Carbon build up in engine is when the valve guides or seals are worn causing the Engine to swallow in Engine Oil down the guides.

Cars that are with the highest risk for Carbon Build up problems are related to the newer “Direct Injector” Engines.

Direct Injector Engines Technology by injecting the fuel directly into the Cylinder, allowing carbon to build up on the Intake Manifold and other surfaces inside the engine. This process prevented the additives of the fuel from coming into contact with the Engine surfaces resulting in Carbon build up. 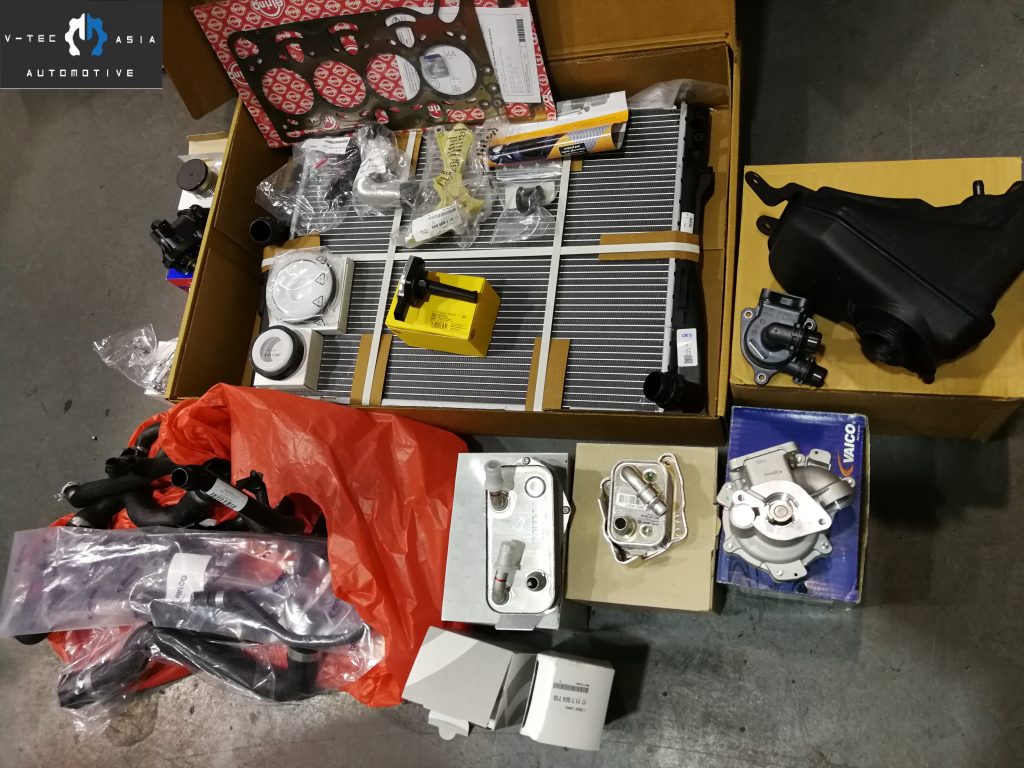 What Is Normally Replaced In Engine Complete Overhaul?

Our Workshop has worked out a listed of Recommended Engine Components Replacement from our experience, below parts are all inclusive our Engine Complete Overhaul Package:-

*Note: Above parts is only for reference, different workshops may propose a different list of items 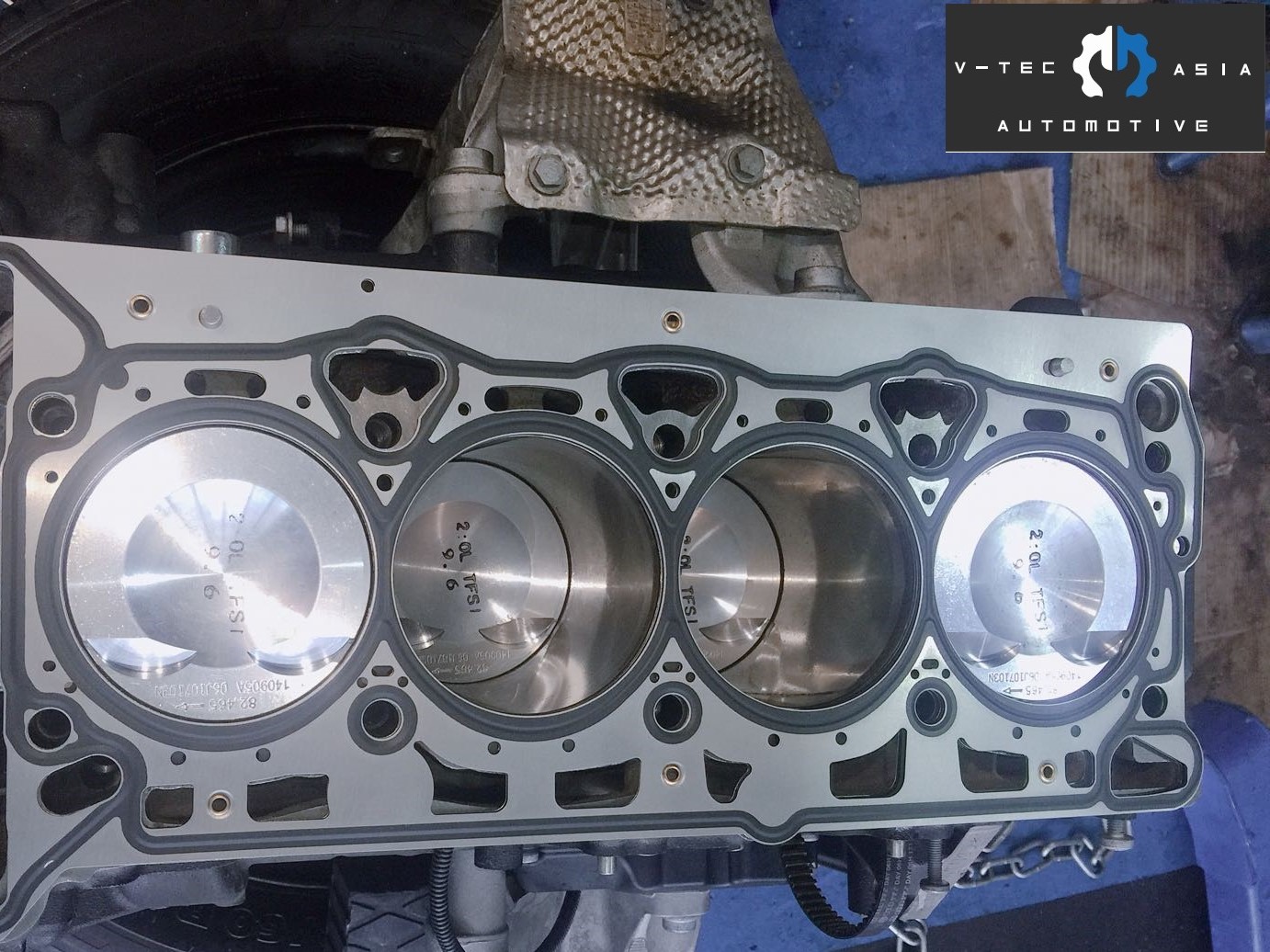 Tips On Finding A Workshop For Decent Engine Overhaul

It’s important to ensure you find a Responsible Workshop for the job, and

Engine Overhaul Job should come with a Warranty for the car, approximately

6 months of coverage on Engine Components.

Also it’s not recommended to choose a workshop for the job by Price comparison;

Good job by the workshop will make your feel like you’re driving a brand new car;

And will last for many years to come.

And after 1-2 years you might feel you need another Engine Overhaul again.

Get a Good job, not a Haste job!

Here's an inside look of the Pistons located inside the Engine, how Shrink Pistons looks like

Send us an equiry on WhatsApp